There is a new Thermomix YouTube video featuring WA chef Matt Stone making almond milk and then making a rice pudding with it.  I was tempted to make almond milk because it sounded like a challenge and I tasted a lovely version at a Thermomix consultant gluten free cooking class.  So away I went.

I ended up following the recipe given by Quirky Cooking for rice and almond milk.  I soaked 50g brown rice and 40g whole almonds plus 4 or 5 pitted dates in 1 litre of water overnight then blended them in the Thermomix on Speed 9 for 2 minutes.  Add a tablespoon of either flavourless or complementing flavour oil (eg, macadamia, grapeseed, coconut) to give a creamier texture to the milk.  Cook for 6 minutes at 60 degrees, Speed 4.  Puree on Speed 9 for 1 minute.  Let it cool for a bit.  Strain into a vessel through muslin if you have some handy, or a nut bag if you are even handier or through a fine sieve if you are me and new to the requirement for fine straining of nut milks.  Keep the resulting sludge and either put it in some kind of cake batter if you are baking straight away or dry out in a low oven for a bit to make it less sludgy and more like an almond/rice/date meal to use later.  Or you can look at the video mentioned above and do it his way.

Rice pudding I have not had much patience for.  My mother was very good at making it, therefore I have a nostalgic hankering for it now and then.  Until Thermomix, however,  I have only attempted it once or twice before.  Like custard it just takes too long on the stovetop and is too fraught with burning opportunities or an unpleasant outcome that makes me want to throw the saucepan in the bin contents and all and storm off to bed.  Now I had made almond milk no problems and I really wanted to see if it would taste nice in a rice pudding as Mr Matt so confidently assured us it would.

The recipe given was a bit large for the two of us, so I halved it.  I didn’t bother with the poached rhubarb bit, not having any on me and because I was wanting to use that plum sauce again.  I found it interesting that the recipe calls for half almond milk, half pure cream.  So if you are non dairy I am guessing all almond milk should work okay, just maybe end up with a bit thinner result.  I put in 240g almond milk, 240g cream, a teaspoon of vanilla bean paste I made a few weeks ago (you could use half a vanilla bean split and scraped, or even vanilla essence) and cooked for 8 minutes on 90 degrees on Speed 2.  I then added 100g arborio rice (as I am unaware of Rainfed rice as specified in the recipe, something I am sure will be corrected next time I see some of my extremely knowledgeable Thermomix colleagues) and cooked 20 minutes at 90 degrees on Reverse, Speed 2.  Matt Stone didn’t say to put on Reverse but I was a little scared not to, not wanting to make rice paste for dessert.

On tasting, the rice was cooked but it needed a little more sugar, so I sprinkled some cinnamon sugar in and poured some plum sauce in then mixed on Speed 1 for 5 seconds (again worrying about turning it into a paste).  It made a good amount for two.  Sploshing some more plum sauce on top made it look prettier and gave it a great flavour.  The almond milk didn’t make itself strongly known, but I did notice that after finishing I didn’t feel like I had a brick in my tummy as I did the last time I ate rice pudding.  I think I shall make this again. 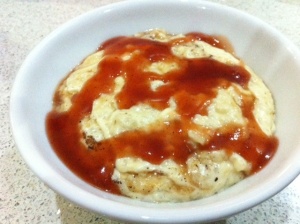 Meet...and bring one project to complete!

My Foray Into Food Storage

Food Innovator, Recipe Sharer. My kitchen is small but mighty.

What does the last of the housewives do?