Hot summery nights call for cooling dinners.  Or lunches, or brunches, because where I am it is pretty much the same temperature all day and night.  This dish cools you down, is packed with fresh vegetables AND can cope very well with adding vodka or sherry to it for a Spanish Bloody Mary.  Hey, a lot of people are still on holidays!

The beauty of making this recipe with a Thermomix is it takes away the need for the fiddly process of removing skins and seeds as blending it in the final step crushes everything into a smooth, smooth rosy liquid.  You can adjust the flavours as necessary.  Add more or less garlic.  Boost the vinegar.  I find many gazpacho recipes too heavy on the vinegar which makes the fresh flavours of the vegetables disappear under a face contorting tang.  The gazpachos we had in Spain (did I mention I’ve travelled?) were fresh and zingy with just a hint of vinegary sharpness.  Its all about balance.

This recipe is a conversion of the gazpacho andaluz in Movida, a beautiful cookbook from the Melbourne chef (and now Australia wide restauranteur) Frank Camorra.  I’ve never eaten at Movida, but I just heard that there is a new one at Sydney airport, so it could be something to cross off for 2014 next time I’m visiting family.  Thanks Kay for the heads up on that one!

Roughly chop (halves or quarters) 1kg tomatoes, throw into Thermomix bowl and puree on Speed 7 for 20 seconds.  Deseed one red and one green capsicum and quarter.  Roughly chop 2 lebanese cucumbers and a red onion.  Peel a garlic clove.  Throw them all in the bowl with the blended tomato.  Chop it all up on Speed 7 for 20 seconds then blend on 9 for 1 minute.  Add 100 ml olive oil and 10-20g vinegar.  The recipe says 60ml vinegar and to use aged sherry vinegar.  I prefer less vinegar.  I added apple cider vinegar because I don’t have aged sherry vinegar and because I have the apple cider vinegar with the mother and am still on the idea that it might have added health benefits.  If you want a clearer, crisper taste I would recommend adding just a nice dry sherry.  Whichever you add, taste as you go so you don’t wreck the flavour with too much sharpness outweighing the fresh flavours.  Add a teaspoon of salt and a good amount of freshly ground black pepper.  Blend again on Speed 5 for 10 seconds. 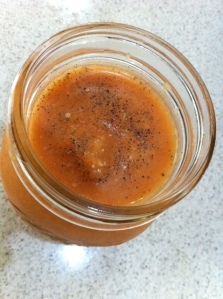 At this point your Thermomix is going to be pretty full.  The last step is easier done in two batches.  Its a bit of a pain, but it does save cleaning up a lot of soup running all over the place if you don’t split it up.  Do this step just before serving so the soup is icy cold.  Pour half out and set aside.  Add two handfuls of ice cubes and blend on Speed 9 (go up slowly so as not to frighten your MC to halfway across the room) for 1 minute.  Do the same with the second half.  Check consistency and thin if necessary by stirring in some chilled water.

Serve with some fresh ground black pepper and a sprinkling of fresh herbs (mint, basil, chives, parsley – depends on your mood and international flavour profile).   If you are in a party frame of mind mix with vodka and serve in shot glasses.  Or go hipster with jar glasses and silver straws (thanks Miriam for mine!).  Or go 70s Bloody Mary style with a big celery swizzel stick.  Anyhow you have it – enjoy!

Meet...and bring one project to complete!

My Foray Into Food Storage

Food Innovator, Recipe Sharer. My kitchen is small but mighty.

What does the last of the housewives do?